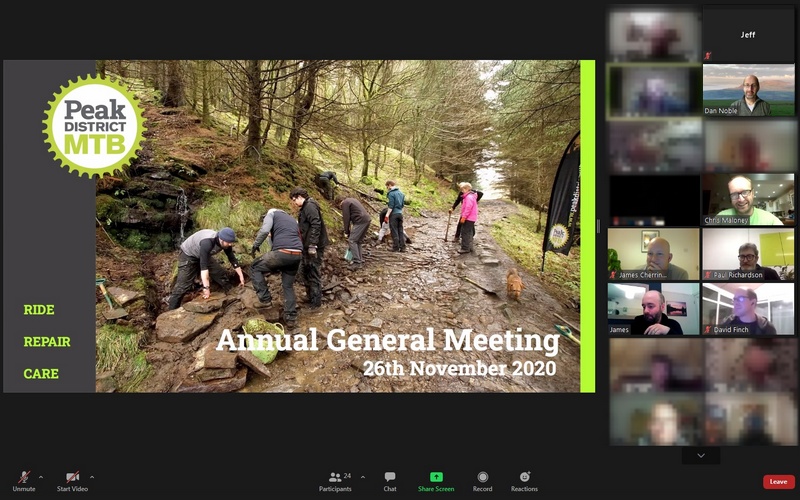 “The biggest thing to take from that AGM” says Dan Noble, chair of Peak District MTB, “for me, was the amount of positive stuff we’ve got to follow up on. There was loads of great conversation, challenge and debate – perhaps even more than we normally get.”

Dan was talking after the Peak District MTB Annual General Meeting 2020 – an understandably online affair – but no less useful for it.
“COVID has done for a lot of things this year, not least riding, volunteer days and us getting out there talking to people,” says Dan. “And obviously we couldn’t host the event in the pub like we normally do – so zoom it was. And it led to some really great engagement from people”

During the AGM, Dan and the committee quickly dealt with the housekeeping we have to do as a constitutionalised group before getting into the meat of the discussions – our activity. We’ve been (safely) busy throughout 2020 with relationship building top of the list. Our work in areas such as the Upper Derwent Valley and other popular spots elsewhere going from strength to strength. It was also great to hear from members about what they’d like to see more of or get more involved with.

Dan, who was voted chair for the third year running adds, “Our members are what makes Peak District MTB. We were set up to be the voice of mountain bikers in the Peak and so hearing their thoughts and suggestions was great. And it was even better to see a number of our members wanting to step up and get more involved – we always welcome people wanting to muck in – either on a volunteer day or behind a keyboard and phone; it all makes a massive difference.”

One thing that many people have had this year is just that – time – and for a group like ours, time and effort is perhaps the most important thing.
“Our ‘patch’ is huge – from way down in Staffordshire all the way up north towards Marsden and Holmfirth and we have interactions up and down the national park,” says Dan. “Getting eyes on the ground is the hardest thing and then getting people knocking on the right doors is quite another. Our task force plans are all about that, and while we do need a little bit of cash to keep things going – donations welcome everyone – really having people getting stuck in and involved with Peak District MTB actively is even more important.”

A final word from Dan, “2020 has been a pretty odd year, let’s be honest. But as we look to 2021 – the events, volunteer days and normality it will hopefully bring, let’s look forward to another brilliant year for Peak District MTB.” The virtual AGM allowed us to hold votes on re-election of officers and an update to our constitution, which were approved.

Thanks to all those who were able join us on Thursday night. We know some weren’t able to make the meeting, but we will be able to share some more information from the AGM soon and there’s more details below. And many thanks to those who’ve already answered the call for involvement in helping us work in more areas in the coming months. If you’d also like to help drop us an email to info@peakdistrictmtb.org

The Chair’s summary of our last 12 months, as covered in the AGM:

2020 has been a challenging year for everyone. Our volunteer trail maintenance – done in conjunction with Peak District National Park authority and Staffordshire Wildlife Trust – had to be put on hold due to lockdown, with other factors such as appalling weather and broken-down vehicles preventing others. Just when we were about to start up again, lockdown #2 was announced. Fortunately our members and followers have continued to keep an eye on trail conditions and have done their own little bits of low-key maintenance such as clearing drainage when on the trails. Thanks – please keep it up.

We had a couple of good sessions on the Roaches Estate, replacing some rotten fencing that protects a steep drop on the fabulous bridleway descent from Roach End, and also planting sphagnum moss with a number of other volunteer groups to repair the damaged moorland following the devastating 2018 fire.

2020 also saw the groundwork for the opening of the new permissive bridleway near the popular Beast trail at Ladybower. This follows many years of pitching to Severn Trent Water about improving access around the hills around Howden, Derwent and Ladybower.

Lockdown also got more people out riding their bikes. This is a good thing, but it did cause issues at some of the hidden riding areas. Areas such as the managed forest of the Goyt Valley, Derwent Valley and Macclesfield Forest have had active trail building for years, but it has existed ‘off the radar’ and largely tolerated by land owners and land managers. Social media sharing has meant the trails are no longer off the radar. An increase this year in usage – often when conditions meant the trails should have been rested – has caused conflict and concern from both locals, those responsible for managing the land and even those who built the trails. We’ve had positive engagement and on-site visits with the land managers, carried out user surveys and spoken to the local trail builders. Everyone feels there is a positive compromise to be made, but the challenge remains of how to engage with those mountain bikers who don’t fully appreciate the impact of their actions. Our man Jeff wrote a very well received article on this growing challenge.

This is where we need your help in setting up local “Task Forces” to ensure these hot spots continue to provide access for mountain bikers and tackle the issues that have been exacerbated in 2020.

As a final point I want to extend my thanks – on behalf of the committee and members of Peak District MTB – to Esther Hobson and Andrew Burdett, who recently stepped down from their official role on the committee.

Esther has been a tireless advocate for mountain biking over the years. She was instrumental in the “Picnic Protest” on Rushup Edge that brought Peak District MTB to prominence, and even had a mainstream TV interview painting mountain bikers in a fantastic light. Andrew has been the driving force between Peak District MTB’s website for several years. We often receive positive comments about our professional appearance and Andrew’s work making our online presence so strong is no small part of that. Andrew will continue to look after our web presence, but is stepping down from active committee duty.

Thanks to both Andrew and Esther for their fantastic contribution and hard work over the years.”