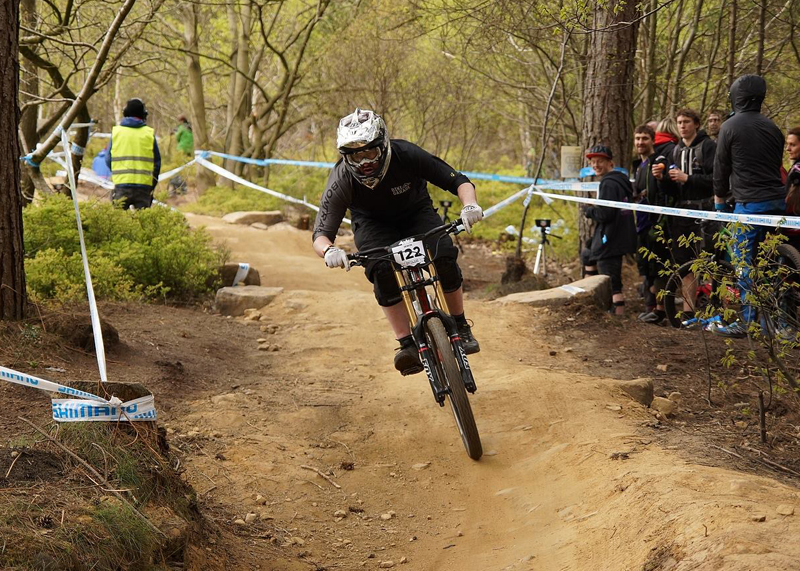 James Irwin is a founding member of Peak District MTB. He’s also our trail maintenance expert and has worked hard for years to improve some of our favourite bridleways and byways. Those of you who have ridden in the Dark Peak will have definitely ridden over some of his handiwork.

So James, you were one of the founding members of Peak District MTB. Tell us about it

Were you doing some digging before that?

I was part of ‘Ride the Peak’ which was a similar organisation to ourselves. It pre-dates Ride Sheffield and had some members from both groups. We were invited by Martyn, a Peak District National Park Ranger (a fellow mountain biker) who wanted to bring us into the fold so the work we did could be done legitimately with all the right permissions.

When you do a dig day, what are your aims?

We try to do it to make things better to ride. We are trying to make it more sustainable so there is less of an impact and more fun to ride.

Tell us about your work on Winstone Lee Tor?

Winstone Lee Tor is a really popular mountain biking route and gets a lot of people riding it. The main aim was to try to get people riding something that was on some substance. The current position of the bridleway isn’t where it was historically so people are riding across soft peat in a lot of places rather than the harder rock surface. Not their own fault, that’s just the way things have been evolved because it’s not been actively managed.

Obviously the reason people go up there is to ride singletrack, something of interest. A lot of the time it’s about managing to build sometime sustainable whilst being interesting. A lot of the people that have been doing work on bridleways like this – Derbyshire County Council etc – their approach is more “one size fits all”; they do road planings, and make things a bit boring. What we’re trying to do is show that maintenance can be done and routes can still be fun to ride. We want to avoid routes just being buried, almost like an urban environment; you can go anywhere to ride that and that’s not what you come to the Peak District for.

So I want to help out, what would I do if I came on a dig day?

We started doing it and it was a bit of learning on the job. It’s a team exercise, we talk through what we’re going to do and people are learning what we’re trying to achieve as well so that they are gaining experience. This means if they are riding a bit of trail themselves they will start to see the problems we’re facing and seeing the solutions to it. Often it’s really basic stuff, improving drainage, the original line is blocked, there might be an obstruction that needs opening up. We’re all riders and we all see things differently so it’s good having a lot of people there that can work out what the best way to achieve a line that is fun to ride. It also means that people can learn how to keep their local trails in good condition.

You own Bike Garage: a bike shop and bike hire in Bamford. Do you think people see mountain biking as an important business and tourism opportunity?

Yes. Mountain biking is a young and growing sport, we’re the second biggest user group in this area and that’s beginning to be recognised. A lot of other businesses are seeing this; a lot of the B&Bs, cafes and pubs are keen to get switched onto it and there’s a lot more support for us. There’s so many opportunities to make money and that’s reflected in the local economy.

What was your first bike?

My first mountain bike was a Gary Fisher, cantilever brakes and the suspension didn’t work so I tried to fix the fork by putting a wine cork in the top of it. I was riding around one day and it actually flew out and hit me in the eye. That bike didn’t last long.

You hire out bikes to people new to the Peak District. What advice would you give to someone just starting out?

Buy a map! Be willing to explore. Unlike riding a trail centre you aren’t following a set route; you are making that yourself. This has perils but many positives. Find out about things, have a look for information online (check out the Monkeyspoon Guide here) and explore the outdoors.

We are keen to expand the dig days and need more volunteers to lend a hand. Anyone can help and give as much or as little time as they can. We’d love to hear from you. Drop James a line at james@peakdistrictmtb.org