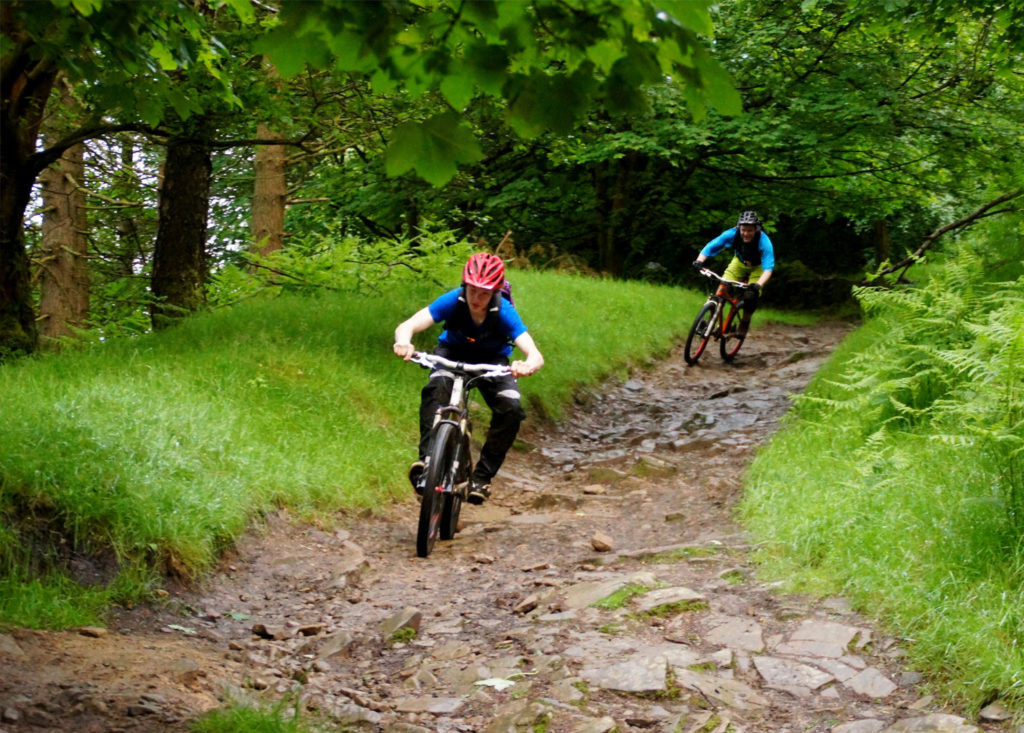 In a scene which I’m sure many of you will recognise, the walker stated quite loudly to his wife “Look, he’s taken no notice of the signs either. They shouldn’t be on here”.

I could have ignored it and ridden on only to vent my frustration online later after a grumpy ride, but it was a sunny evening, I was in a good mood. Plus, as a campaigner of sorts for open access it feels a little like my place to speak up. So I did. And the result was pleasantly surprising.

I was taken to task by the walker for riding somewhere I shouldn’t have been and he was absolutely right.

The path in question is one of those handy little shortcuts that gets you to the good stuff; a metre-wide, flat track beside a conduit which cuts out a 1.5 mile detour around the road. It’s used by riders every day to join up the suburbs with the Peak. But of course, as it’s so close to the last of Sheffield’s houses it’s busy with people out for a stroll or walking the dog.

At both ends it has wide gates to allow wheelchair access and it is clearly marked up as a ‘footpath’. The walker and his wife had just passed one of these gates on to the road and three bikes had passed just before I arrived. I could tell from his gestures that he was “not happy” with the riders who had ridden on to the next bit of path and I rightly anticipated him having words with me.

Of course, he didn’t stop me – instead he employed that wonderfully passive aggressive tactic of simply moaning to his wife about me loudly. I stopped, turned to him and told him that it “is silly isn’t it?” and asked him why. He wasn’t angry or rude – just confident of his own position and dismissive of mine.

What followed were the typical arguments levelled against ‘cyclists’ you all know too well; “it’s illegal” (it isn’t), “you come flying down here” (neither me nor the other three before me were going at any pace at all), and more amusingly “it’s a nuisance”.

And that was the crux of his argument. Cyclists were a nuisance. I agreed some were and some do fly down that path and that those individuals are just as annoying to me. But I also pointed out that every group has its idiots; the real problem is a lack of respect – and that that respect has to go both ways.

There’s been some fantastic work done in the UK on trail advocacy recently. Groups like Peak District MTB, Ride Sheffield and Keeper of the Peak are building productive relationships on a foundation of mutual respect. You just have to see the results of that work in the Peak and Sheffield.

The Scottish Access model is another prime example of how ‘respect’ works. Users are expected to respect the places they walk, paddle, climb, ride, run or cycle, and in return, landowners respect the trail users’ rights to be there. It’s brilliant in its simplicity and – apart from a few isolated examples – has been an overwhelming success. If that can work north of the border, why can’t it work down here? What difference does a line on a map make to the impact of trail use? The walker – unaware of the Scottish Model – had no answer.

We talked at length about it and in just a few minutes, what could have been another incident in the long list of walker/rider conflicts was instead a pleasant evening conversation and a promise by a walker to look into the benefits of open access. He also determined to find out more about the local trail advocacy groups.

It didn’t take much effort on my part – just a stop for a rest and the willingness to listen and respect his point of view – but if I managed to convert him to a more open-minded (and open access) way of thinking, it was well worth the 5 minutes of my time I’d saved by taking the short-cut in the first place.