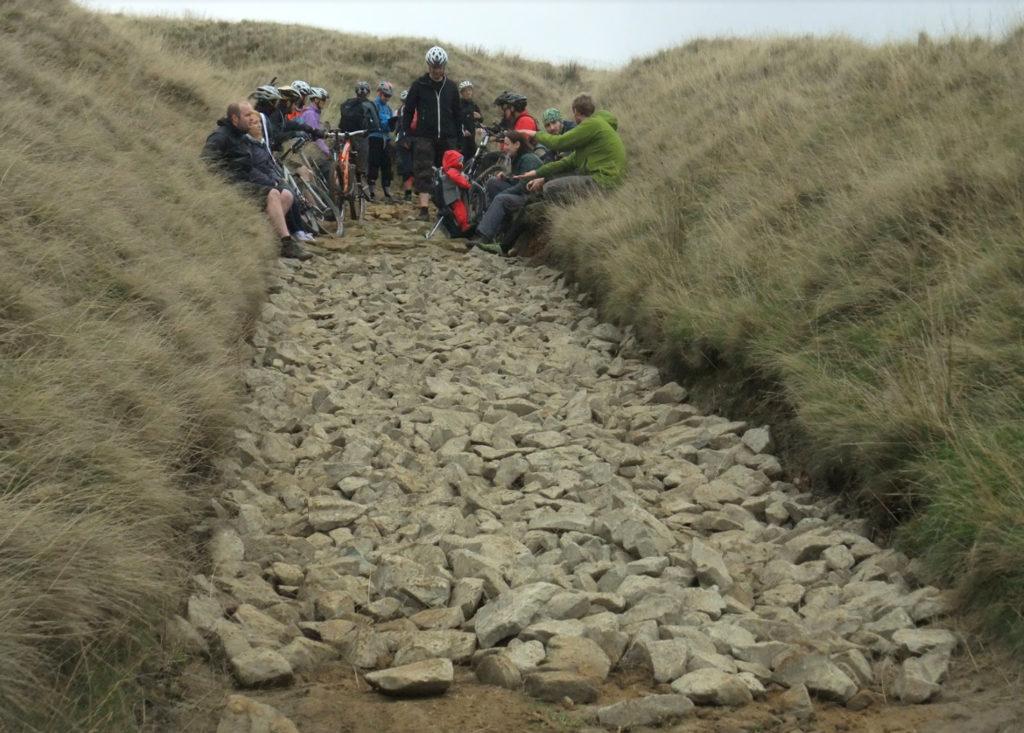 A huge part of our campaign is forging alliances across user groups, businesses, landowners, authorities and politicians. I’m delighted to report that two of our members had a tremedously positive meeting with parliamentary representative for the High Peak, Andrew Bingham MP.

Andrew is a High Peak resident from Chinley and was aware of the Rushup Edge situation having received a number of letters of complaint from constituents.

Andrew was presented with photos of the work on Rushup Edge as well as what has been done on Chapel Gate, Stanage Causeway and the highly controversial surfacing of Wigley Lane in the White Peak. With a civil engineer present we could explain to Andrew the strutural inadequacy of many of these repairs as well as the concerns over their suitability and whether in fact they are even needed. He had a good understanding of why a “one size fits all” approach to trail maintenance is not appropriate.

To press the point Andrew was shown the successful work on the Roych which you will recall was not carried out by DCC. The Roych maintenance has received a lot of positive comments from all user groups and actually cost less than what DCC have been paying for their controversial maintenance on Rushup Edge.

Cost was something Andrew was particularly shocked by. He has constituents contacting him to complain about carers’ allowances being cut to save £500, yet there is DCC money to spare for inappropriate or unnecessary trail maintenance. When Andrew saw the cost for the Rushup work his eyes popped out of his head!

It was clear that Andrew was supportive of our campaign and understood the tight timelines we’re working with on “Rushupgate”. He has assured us he will follow this up on Monday with Jim Dixon – Peak District National Park Chief Executive – and will also help us canvass further support from local councillors.

Much like us he simply doesn’t understand why DCC are carrying out this work on Rushup Edge.

Our members – Esther Hobson and Richard Johnson – went to Andrew’s surgery prepared with a huge array of facts to present our case and support what we’re doing. It goes without saying that this level of preparation is important but we have to thank Esther, Richard and everyone behind the scenes who is pulling this data together and canvassing for supporters. When we get the support of a member of parliament for our cause it certainly makes that hard work feel worthwhile.