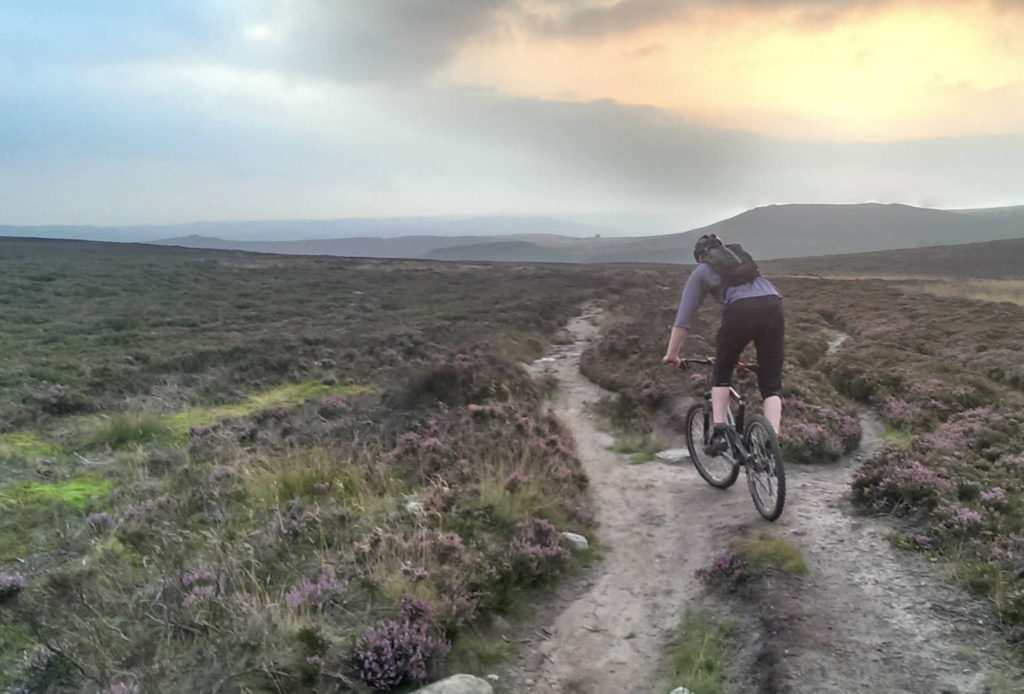 Another in our series about the committee members of Peak District MTB, this time the spotlight is on Mr Chris Maloney. Over to you Chris…

I was invited! I’d got to know Paul and Dan through regular beginner’s rides I’d run through Singletrack World, plus I’d been making a mischief of myself in asking people like Derbyshire County Council what they were up to so they asked me to join. I think it’s important to put something back. We get a very bad rap quite unfairly so it’s up to us to push back against that (or it was), it’s now up to us to promote the community as a good thing. You see the work that’s going on on Whinstone Lee Tor, all the work that’s being done by groups like PDMTB and Ride Sheffield; there’s only mountain bikers doing that kind of thing!!

Difficult to pin down a single favourite. How about a fantasy Peaks ride? Climb up Brinks Road from Hope then descend Greenlands farm. Climb back up to the top of Charity Lane and descend that, Bottom o the Oven and Cavedale. Climb back up the permissive bridleway on Burbage and descend Plantation before the quarry descent to Stoney Middleton. Finish on the grassy single track into Hope then get a pint in the Barrel at Bretton before heading home. All dry of course. I’ve taken a bit of creative licence there.

Raleigh Bluebird – just like Dan. Then a Raleigh Burner, a Raleigh Kraken, a Saracen Raw (oops), a Carrera Fury, a Kona King Kikapu, a Specialised Rockhopper, a Commencal Meta 55 and finally a Lapierre Zesty 214. Getting an itchy trigger finger on a new one now though….

There are many, many snippets. Most come from being out with my mates mainly. Those sunsets with dusty trails. It may have been a recent one actually. I had a ‘birthday’ ride. Heading down the trail off Derwent Edge/Whinstone Lee Tor I had coincidentally timed it right so that someone was on every gate on the way down. A full, uninterrupted, dry, sunny descent from top to bottom. Grinning from ear to ear. Ask me next week, I’ll probably have another best moment.

11 hours in the saddle in the Lakes. High Street. Drizzle, bogs, autumn so dark very soon. A broken thumb, broken bike, two broken riders desperate to get back to the car. “It’s just over this next hill”. It wasn’t. Nor the next. Or the next. Eventually found it about an hour later, exhausted, cold and knackered. Great ride though. Or it could be Gunnerside. Just soaking wet through all the way round. Like walking on a wet sponge.

My bike maintenance regime is shambolic. It still just about works though.