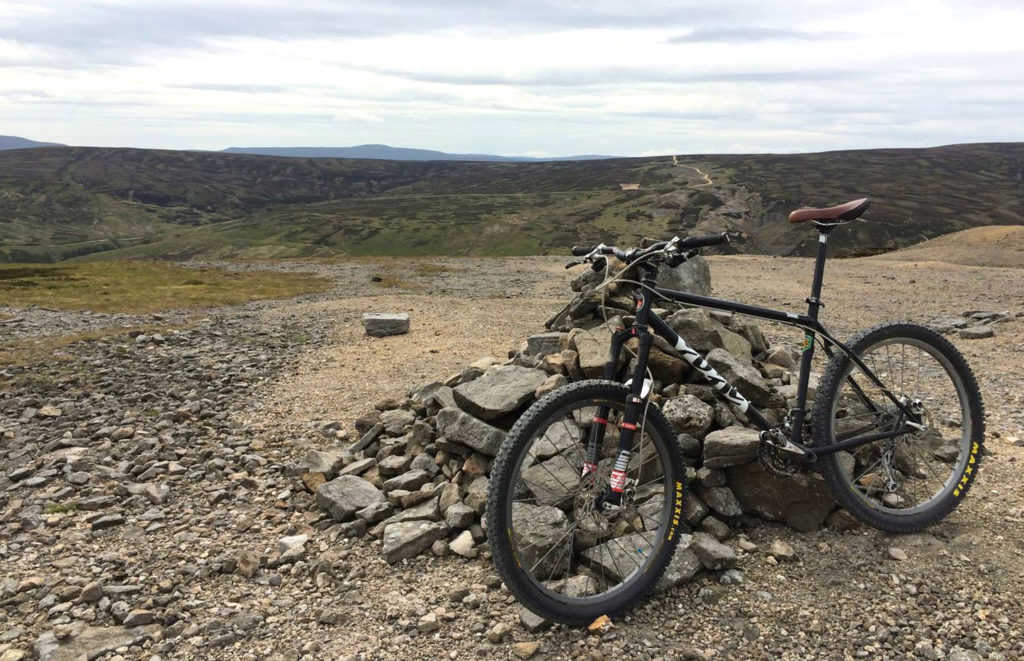 This weekend was the 50th anniversary of the opening of the Pennine Way. As part of a varied programme of celebratory activities Edale Village Hall hosted a talk entitled “The Spirit of Kinder”. In April 1932 over 400 people held a mass trespass over Kinder Scout that is credited as being hugely important in the development of rights of way and the National Parks.

Access is significantly more restricted in England and Wales compared to Scotland where you can pretty much roam where you like provided you’re not using motorised transport. Walkers, cyclists, climbers, canoeists and horse riders can all enjoy the Scottish countryside without worrying about whether they are allowed to be there.

Why does this have to be different in England? What additional impact does a cyclist have when, whilst riding through a Scottish field, they find themselves on the English side of the border? This was the theme of one of the talks at the Spirit of Kinder event, lead by Dave Morris.

Dave is a previous director of Ramblers Scotland and is described by the well-respected authority on outdoor pursuits Cameron McNeish as “…(having) done more than anyone else I know to protect Scottish landscapes and wildlife.” Surely someone with an opinion worth listening to.

England and Wales made some progress extending access with the year 2000’s Countryside Rights of Way (CRoW) act. Land designated as CRoW gives people open access to go where they like rather than being restricted to the established rights of way. Such tracts of land tend to be in open country and attempts to incorporate woodland and riverside into CRoW access have proved costly and less than successful. More significantly for mountain bikers, the CRoW act extends only to those on foot.

Dave suggested that opening up access in England shouldn’t follow the CRoW model, which is expensive to implement and has its fair share of hurdles and obstructions as it requires a “cherry-picking” approach to designating CRoW access land. Policies that are not all-inclusive have been, in his experience, failures. Open access by its very definition needs to include all users and all land and can be achieved with two key strategies:
1) Change people’s perception of the impact of trespass
2) Produce an English Access Code

Alan Blackshaw – ex-BMC and Alpine Club president and significant campaigner for the Scottish Land Reform (2003) Act who died in 2011- did a lot of research into trespass in Scotland in the 1960s which lead to a softening of the perception of trespass. Alan worked with landowners to produce the Scottish Access Code and it would seem sensible that a similar code for England is a positive step towards opening up greater access. After all trespass per se is not the problem; the impact of someone’s presence in the countryside is where conflict can arise. It is here that a code created between landowners and countryside users will help raise awareness of what is (and isn’t) acceptable behaviour when enjoying the countryside to which we’ve been given access.

How can multiple user groups share the same open access spaces without conflict? The honeypots of the Peak District can be hugely busy on a sunny weekend so how can a mountain biker share all the trails with walkers and horse riders without each having a potentially significant impact on the other? Dave Morris’ viewpoint is that we need to avoid busy trails and spread the load of our impact; he rarely rides his bike on the Loch Leven Heritage Trail in a deliberate effort to avoid potential conflict with the 300,000 other users. Common sense.

On the Sunday after Dave Morris’ thought-provoking talk I had a genuinely lovely walk with my wife and young kids near Hartington, an area of the Peak District that has seen a number of bridleways downgraded to footpaths in years past. I couldn’t help but think what it would be like if mountain bikers were “allowed” to ride on the footpaths my family and I were using. Would it bother me? Would I feel concerned about my kids’ safety knowing they could run out in front of a KOM-chasing mountain biker?

The fact is that open access is not simply about letting mountain bikers use footpaths. The premise is to allow everyone to go everywhere.

Open access still requires – necessitates – good judgement about where and when to ride your mountain bike. Open access gives us all a lot more choice of where to ride to help reduce the impact of our enjoyment of the outdoors. Open access does not require expensive legislation to work; it requires common sense.