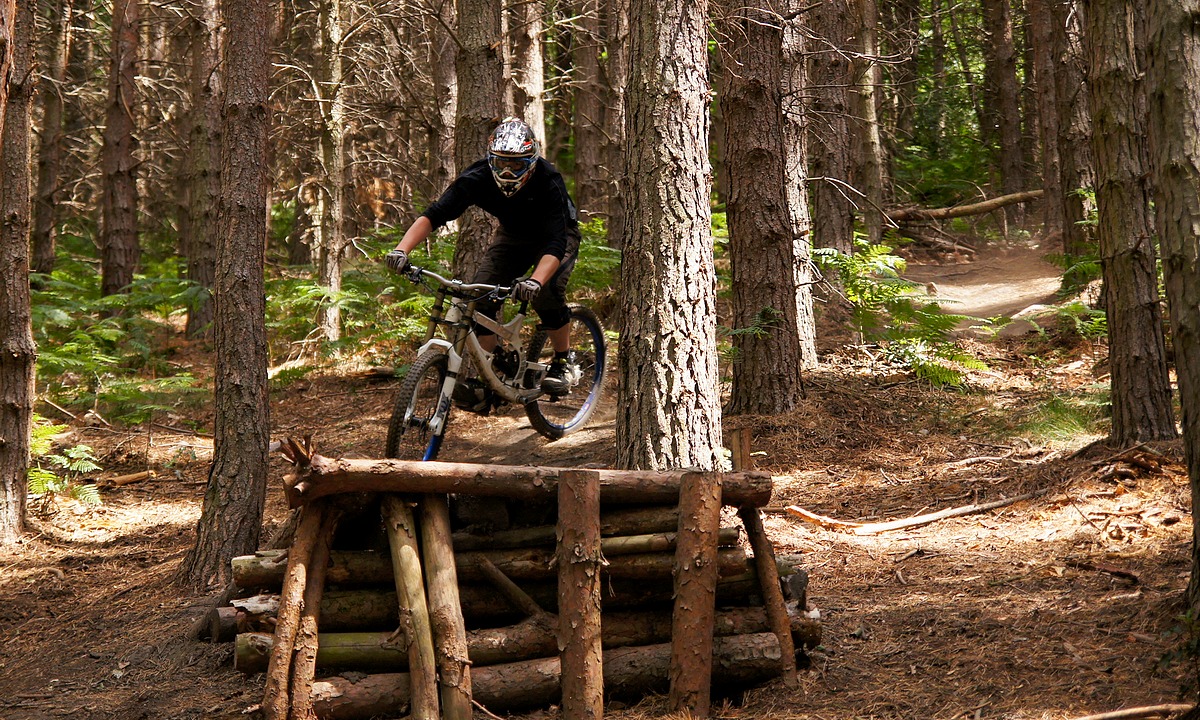 Whilst bridleways and designated trail centres make up the vast majority of trails enjoyed by UK mountain bikers, it is also fairly common that mountain bikers ride on trails that aren’t part of the rights of way network and that aren’t approved by the land managers and landowners. This can range from a picturesque singletrack path across open-access moorland, which may have once been a sheep track occasionally used by walkers, and still look like many other footpaths. To the other extreme, where a few industrious individuals have put in many hours to build a track of considerable scale and difficulty, with berms, jumps and wooden ‘northshore’ ladder bridge features. Generally the latter occurs in woods and commercial plantations.

These sorts of trails come under various terms; unsanctioned, illegal, unauthorised, unofficial, ‘off-piste’, or even ‘cheeky’. Viewed as dangerous, criminal damage, environmental destruction. Or opposingly; doing no harm, legitimate use of common land, fun and challenging to ride, providing more local riding and spreading the load, or even keeping the local kids out of trouble.

Such conflicting standpoints over the digging and riding of these tracks commonly puts these mountain bikers at odds with land managers and other user groups. And easily leads to the perception of all mountain bikers as antisocial yobs only interested in their own enjoyment at the expense of the environment and others. Or little to no different from how motocrossers and quad bikers are often viewed, and whose access rights are ever-shrinking. 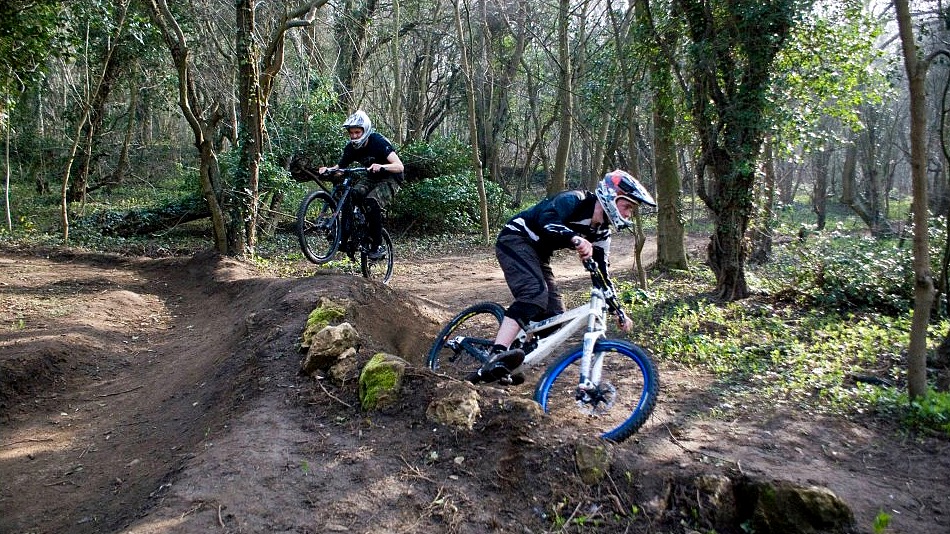 Although, it should also be considered that there are many official trail spots that started life with unsanctioned digging and riding and other places where the activity is largely tolerated, provided it doesn’t get out of hand or cross certain lines. It’s probable that most wouldn’t exist in their current form if mountain bikers had merely politely waited for such facilities to be provided, or had nicely asked for permission to be allowed to ride in new places. Such trails have certainly furthered the popularity of UK mountain biking and even given us an unusual abundance of medal winning British athletes over the past 25 years, particularly in the sport of Downhill racing.

Whilst tracks and their users might fly under the radar for many years, it doesn’t take much for that to quickly change. The recent lockdown, for many months of 2020, seems to have been such a catalyst. 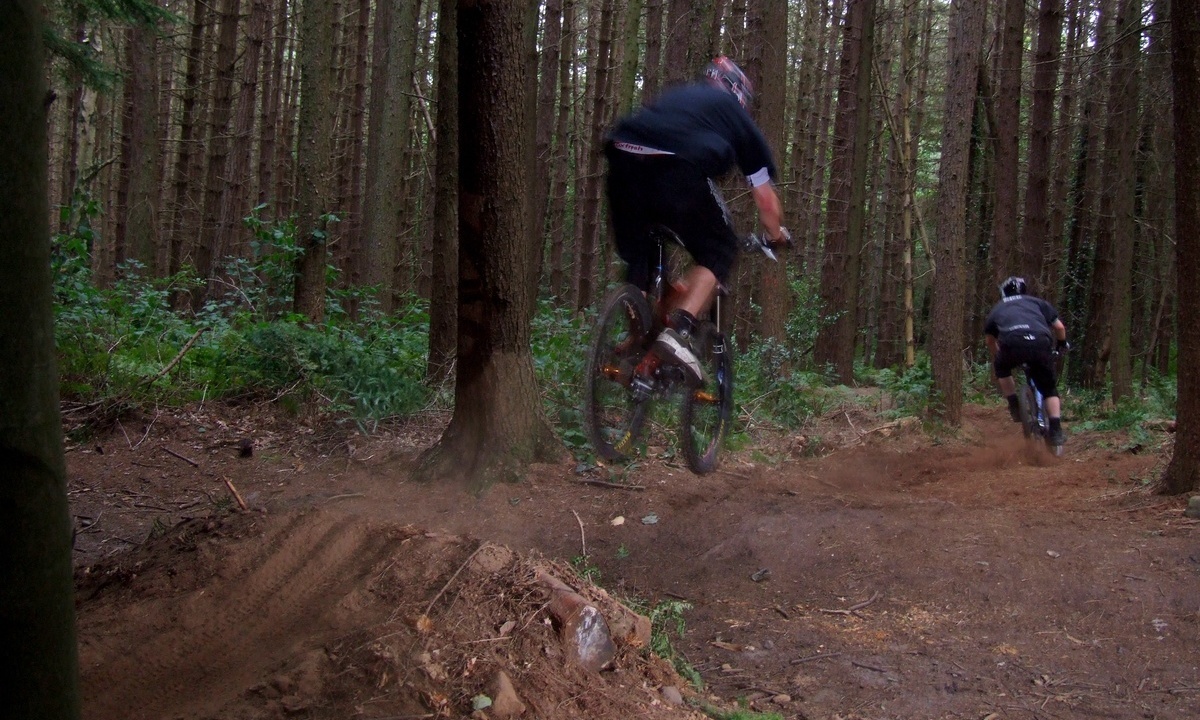 So what can make the difference between tolerated access and improving relations with authorities, or the shutters coming down and hours of spade work going down the drain when the bulldozers roll?

Land managers may have many objections to this sort of use of their land, but these are the most common, and the ones that carry the most weight, where the authorities choose to actively limit and vocally make the case against MTB access:

• Environmental issue
Many areas of our countryside have special legal protections due to plants, wildlife and even soil. The rarer and more unique, the higher the protection. Ancient woodland, heaths and moorland often have protection as Sites of Special Scientific Interest (SSSI, ‘triple-S-I’), which can also be for archaeology reasons. Places like nature reserves understandably have these issues as their top concern.

A common problem is where digging causes damage to live trees, including exposing or even cutting roots. Blocking or changing watercourses, and run-off water flowing down the trail, can result in increased erosion, typically further down the hill. Moving substantial amounts of materials or bringing foreign material into the environment also creates problems. Badgers have specific laws making it a serious crime to disturb them or their setts (holes), which digging nearby would constitute. 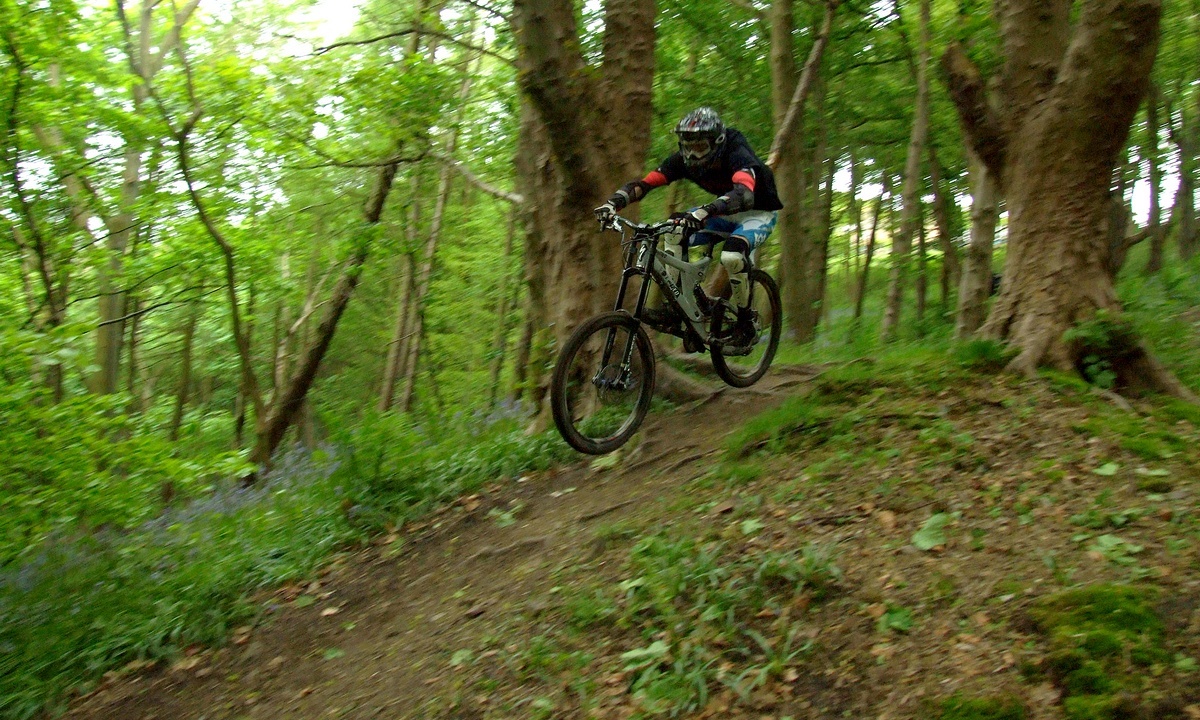 • Liability and Risk
All land owners are responsible for the safety of the public accessing their land and have a ‘Duty of Care’ in preventing foreseeable accidents resulting from their property (or anything built on it). Whilst it is considered that experienced mountain bikers can undertake substantial risk under their own judgement on official purpose built trails with prominent warning signs, it’s a wholly different case where amateur builders have made their own ‘DIY’ features. In particular jumps and northshore, where land owners see themselves likely to be held liable for serious injuries (or worse) in the event of an accident. Whilst those who built the features and are aware of the risk, might not succeed if a lawsuit goes to court, there is great concern that an inexperienced or novice rider will happen across the trails and have an accident. Even more so where land has a mixture of official and unofficial trails.

It isn’t just the trails and features themselves, holes (‘borrow-pits’) where soil has been dug out for jumps, can just as easily create a hazard for the unsuspecting visitor. A more niche concern is where forestry operations take place, screws or nails in standing trees may be considered as risk to chainsaw operators (due to the risk of the chain breaking due to unexpected metal fixtures). 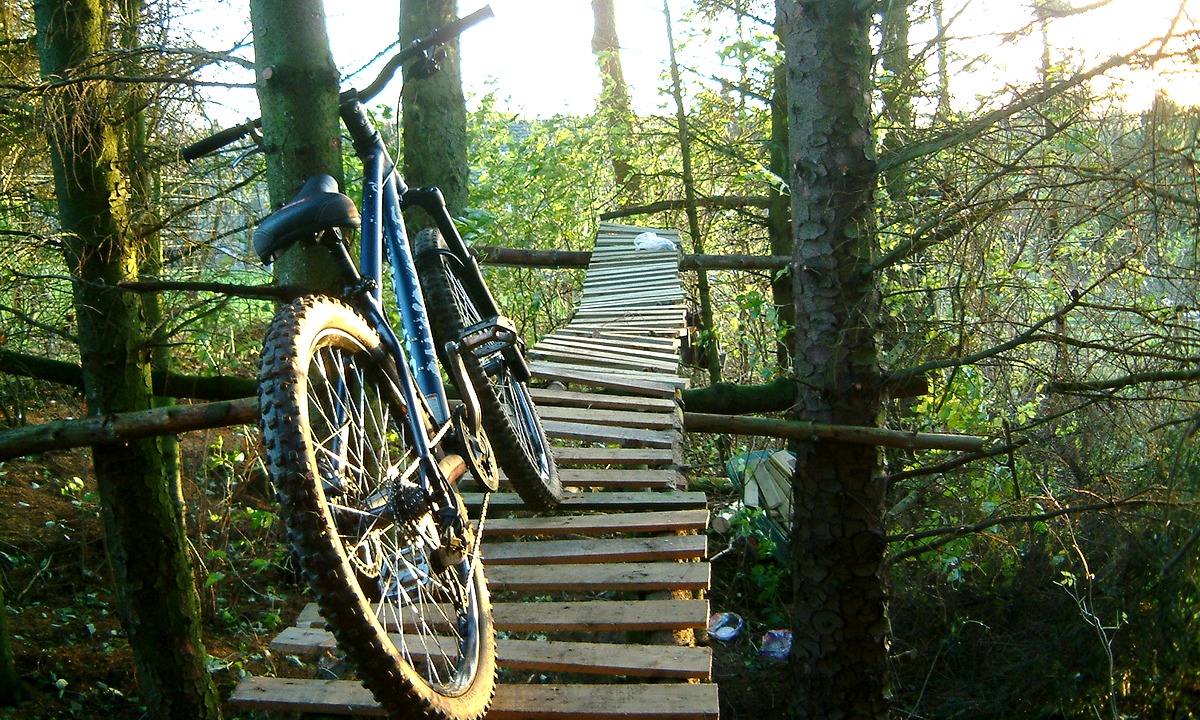 • Conflict with other users
Complaints from other users, who usually have formal access rights, often precede action against MTB access and digging with a common red flag being where trails cross (or jump!) over shared paths or exit onto fire track roads, especially where this is at speed or with limited visibility. There have been historic cases of horses being scared by the sudden appearance of a fast moving bike and rider (which is obviously a danger to the horse-rider if the horse bolts or throws them). And, in more extreme and thankfully rare cases, mountain bikers colliding with walkers or kids. It’s pretty hard to argue against mountain bikers getting banned if a 5 year old has been knocked for six! No amount of ‘Be Nice, Say Hi’ covers it.

• Other Damage & Risks
Damage to fences and walls costs the landowners time and money and may also let animals escape. They are not built to withstand regular abuse and they don’t hold up well if they’re regularly climbed over. And, where a ‘secret’ trail suddenly becomes not-so-secret and is well used, the occasional careful fence climber quickly becomes a lot of uncareful fence climbers (or even a very stupid fence cutter!).

Once a trail or jump spot becomes a place to hang out, litter starts to proliferate, and sometimes campfires too, which is a particular concern to land managers.

• Volume of use and publicity
Whilst low-traffic trails might fly under the radar, once higher volumes of mountain bikers regularly descend on a site, the tracks become common knowledge to most people visiting the area. Which means that the landowner must also know and be expected to do something (recall the point on liability). Accordingly, the increase in popularity will greatly increase the amount of concern by the land managers on all the other points listed above.

With picture and video sharing on social media and ride mapping (Strava, etc) being a big part of mountain biking these days, there’s rarely such a thing as a secret trail. Therefore any that are built should be expected to be ridden by the masses in the not-too-distant future. Not to mention maybe appearing in your favourite mag, the latest video edit of the next top rider, or new product launch of the coolest MTB brands.

Land managers and anti-bike campaigners aren’t ignorant of these media and are quite capable of using them to evidence their cases against MTB access. Neither are conventional media, so when a small problem becomes newsworthy enough to turn into a big problem, there is plenty of material to paint all mountain bikers with the same stereotyping brush. 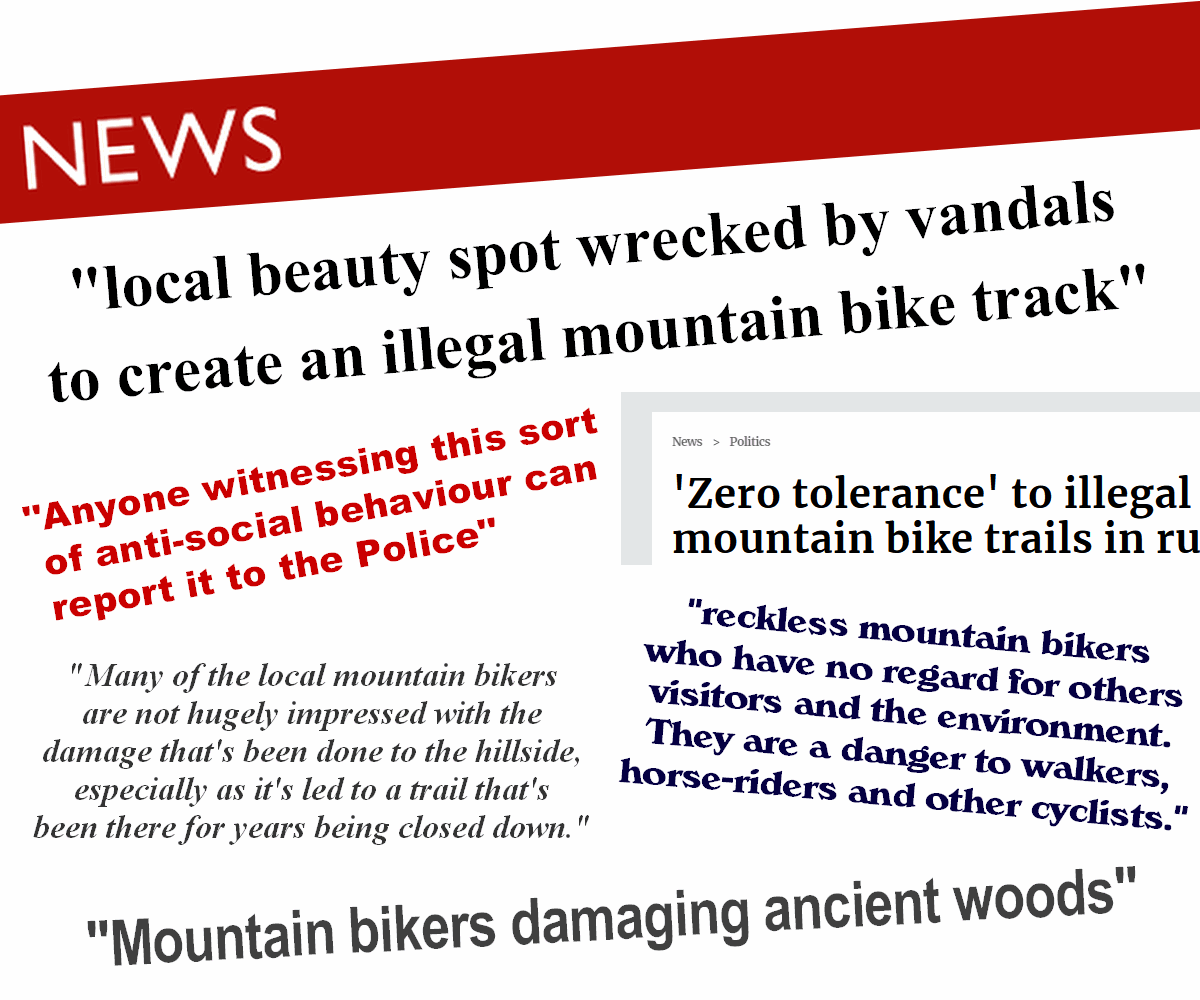 Landowners, in particular with multiple sites, have much to offer, and gain, in working with mountain bikers. As has largely been shown over the years with the Forestry Commission. So for mountain bikers, whether digging new unsanctioned trails or merely riding existing ones, the big questions to consider are; How will it be received by the land-managers? And what long-term effect will it have for MTB access in the area?