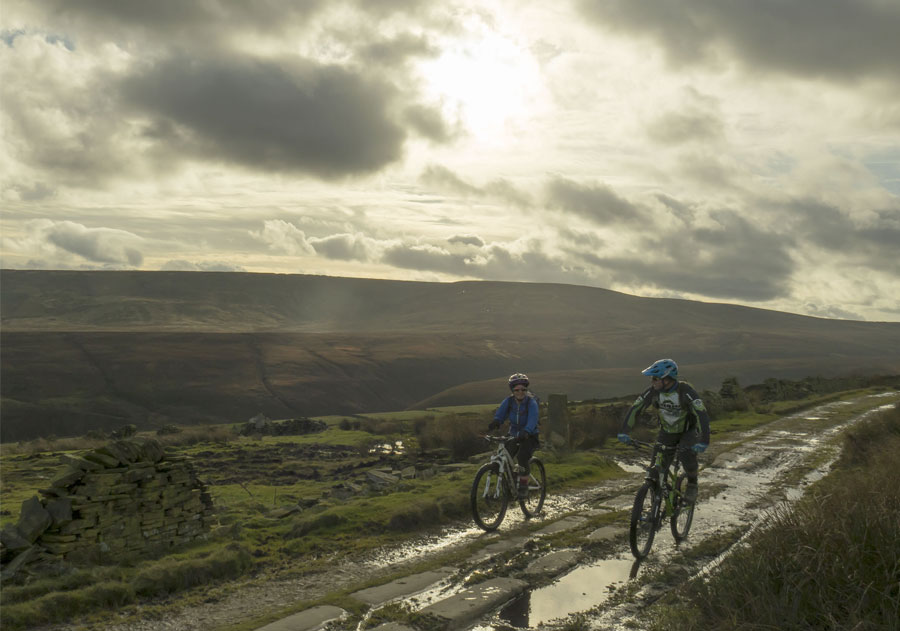 If you thought that the Peak District ended at Cut Gate you’d be wrong. It extends much further North towards Holmfirth and takes in the wilder moors of the Pennines.The area is famous amongst roadies for the relentless climb south out of Holme called Holme Moss. The pro-cyclists who thought the Tour de France was having an easy day in this part of the Peak District would have been rudely mistaken as the gradients around here are steep but the views rewarding. If you want to escape the hoards of bikes and walkers in the Hope Valley and try a route less traveled, this is definitely for you.

This is a short route starting at Digley reservoir but get the map out and you’ll see the area has a load of other old cart or packhorse tracks dating back to when the area was industrialised. Don’t under estimate it though, the climbs are harsh but the descents are worth it.

You start at Digley reservoir which has free parking (it looked like it gets busy after midday). Whilst most of the riding is on bridleways and quiet roads there is a bit of road riding on fast road so bring lights and bright clothes.

You start with a sharp climb out of the valley but fortunately this is the last of the major road climbs. Turn left and you join an old cart road and ride along the old cart tracks which leads West up the reservoir with amazing views over Holme. Cross the busy road and you immediately rewarded with more views towards Huddersfield as you head/slide down a crazy muddy track into the next valley. A short road ride takes you back to the next off-road climb before you rejoin the main road again. A bit of road work later and before you know it you are climbing back up and out of Holmfirth and past the winery (I’m told they get a lot of sun in the summer!) before joining a bridleway which heads around the top of the hill before joining Ramsden Road. Ramsden Road is a typical Peak District broken byway: Watch out for ruts, water bars and walkers. It’s a great, crazy blast down into the valley. Once you are there (if you don’t want to go up and do Ramsden Road again) it’s a quick spin back to the reservoir. Holmfirth isn’t just known for Last of the Summer Wine. The pub in Holme does amazing food in biker portions. There is also a little café attached and is just a short diversion up the hill from the car park. If you are an eco-warrier you’ll love the wind turbines. Prizes for spotting the one with only two blades.

If you want to extend the ride, grab a map and take your pick. For the off-roadies amongst us, you can read the area from Sheffield and Manchester by taking the Transpennine trail all the way to Dunford Bridge then pick up the Pennine trail North towards Holmefirth. I’m told these trails are less boring that you might think and are great for bikes to gain plenty of miles. For the Sheffield locals, there’s always Cut Gate or Wharncliffe on the way home.

Get in touch with your route ideas

This route was introduced to us by a local member. The Peak District MTB committee are always looking for contacts in the outskirts of the park as our eyes and ears, as well as great local guides. If you’ve got an idea for a route taking in lesser travelled areas, drop us a line at info@peakdistrictmtb.org.uk.