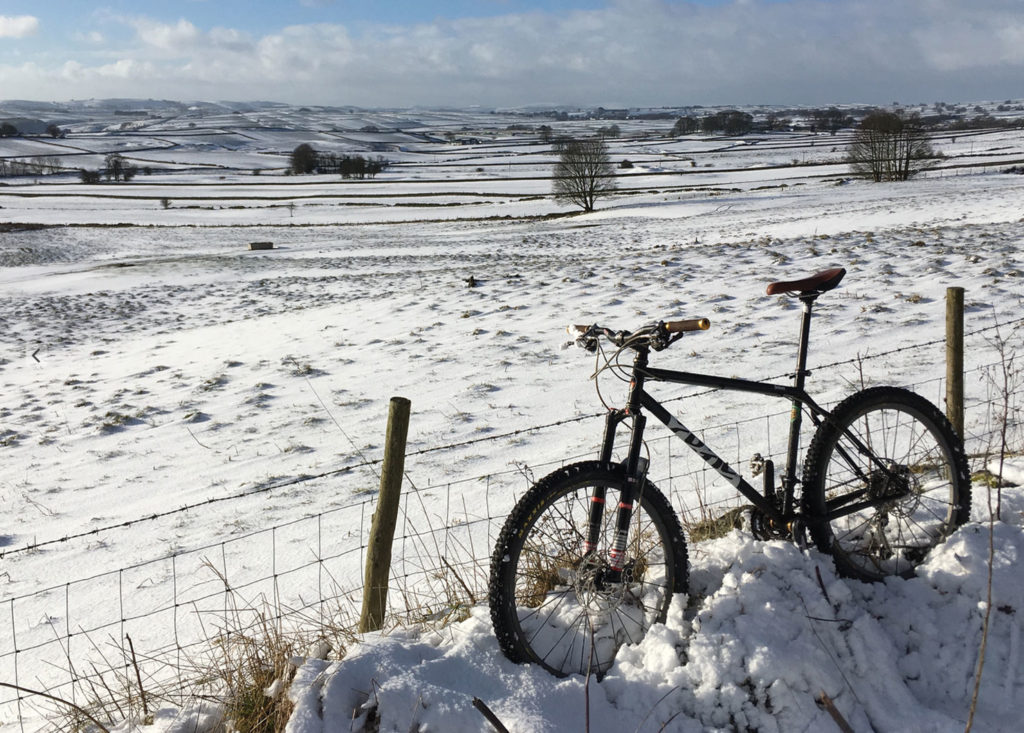 On the restricted byway off Bradshaw Lane near Foolow

There comes a time every year when we get pretty cheesed off with the relentless mud on all our clothes, shoes, bikes and home, and the sound of gritstone grinding away at components. It’s usually in that Blue Monday time around New Year. This year it has been delayed slightly by me taking a little fall (in, yes, you guessed it, mud) just before Christmas and ending up in fracture clinic. Back in the saddle and a traipse across Winstone Lee Tor made me want to stay at home and avoid the mud until the summer came. In compromise I thought: where can I ride without the mud?

The White Peak isn’t exactly renown for being mud-free. You simply exchange the exfoliant properties of grit for the sludgy muck of sheep farming. However, all is not lost. Choose your trails wisely, on the border between limestone and gritstone and you can have a relatively clean and dry ride. You exchange gnar for steep, mostly road climbs with fun and flowy descents and you are rewarded with some epic views, some gruesome history and later whoops, jumps and smiles.

The area is steeped in history. In 1665 the village of Eyam successfully isolated itself from the outside world to stop the spread of the bubonic plague which decimated the village killing at least 250 villagers, only 85 survived. You’ll pass the Riley Graves, the sad spot where one mother buried her husband and six children. Plague stones are still at the edge of the village: these are where money was left for the outside world, soaked in vinegar to ward off infection. Stocks still stand in the village green where punishment was delivered for minor crimes (riding a fatbike with dropped handlebars perhaps?). Later, watch out for Black Harry: a local highwayman who robbed stagecoaches crossing the lonely moors. Don’t worry though, he was caught, hung and apparently ‘Derbyshire vultures’ picked his bones clean.

A few words of warning: the tracks around Eyam are full of tourists on a ghoulish hunt for signs of the plague so take a bell and be prepared to give way. Also Derbyshire Council have a love for badly done repairs around this area so expect the bridleways to be anything from tarmac dullness to crazily hazardous.

Fuel stops and refreshments on route